The Less Interesting TimesIn Search of a Better Tomorrow

I have been asked about my Foundry setup and what I did to make everything so smooth, easy, and cool. I decided to not do a video about it because most of the modules I use already do a very fine job explaining themselves and Encounter Library already has an extensive set of tutorial videos.
So, here are the modules I use with a short explanation of what exactly they do.

Automated Julie & Ben’s Animated Assets: Basically, Julie & Ben make animated assets for various uses but setting it up to look cool in game is kind of a hassle. That’s where Automated Animations come in. With almost no configuration, it uses those cool animations when you attack, cast spells or anything else automatically.

The Furnace: Adds a few nice tidbits which, the nicest of, I think is the Split Journal option. You just select a journal entry and then split it based on headlines. This allows you, if you use D&D Beyond, for example, to just copy the entire text of a chapter, go over it to make sure headlines are straight and then, with a click of a button, create individual entries for each room, which you can drag into the map.

And when you do that, use…

Automatic Journal Icon Numbers: Which creates custom journal notes icons based on the title of your entry. So toss away all those custom marker you specifically made.

Bar Brawl: Allows you to use more bars on your token. A lot more. About as much as you want. You can tell the bars to access any data field on the linked character sheet, change colors, set up what data they display, where they’re located, etc. 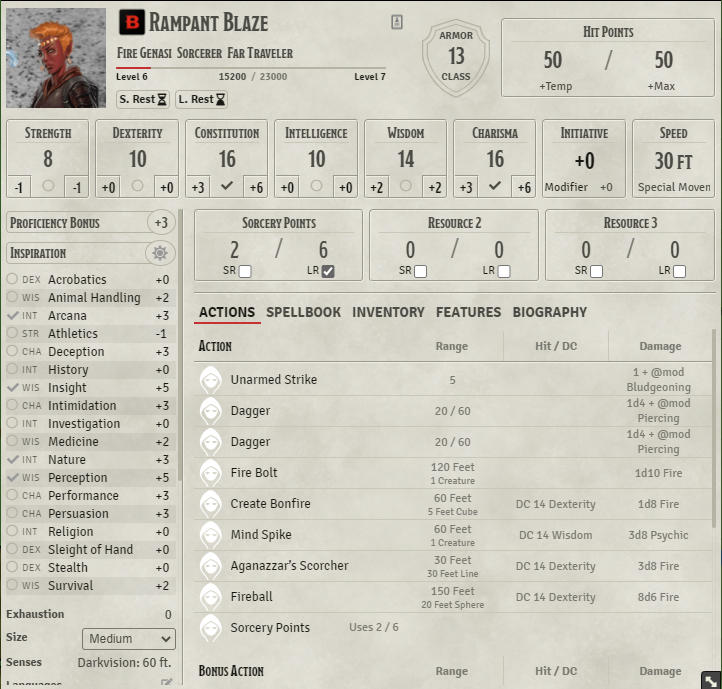 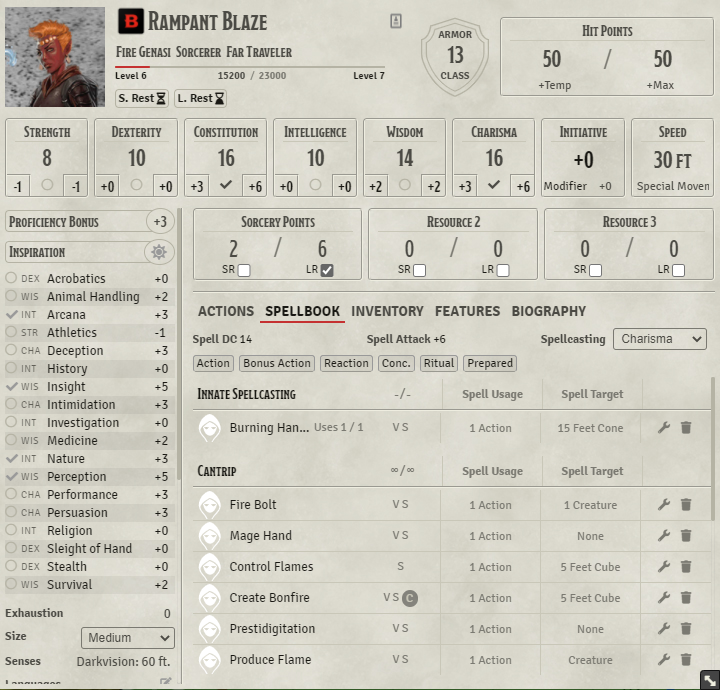 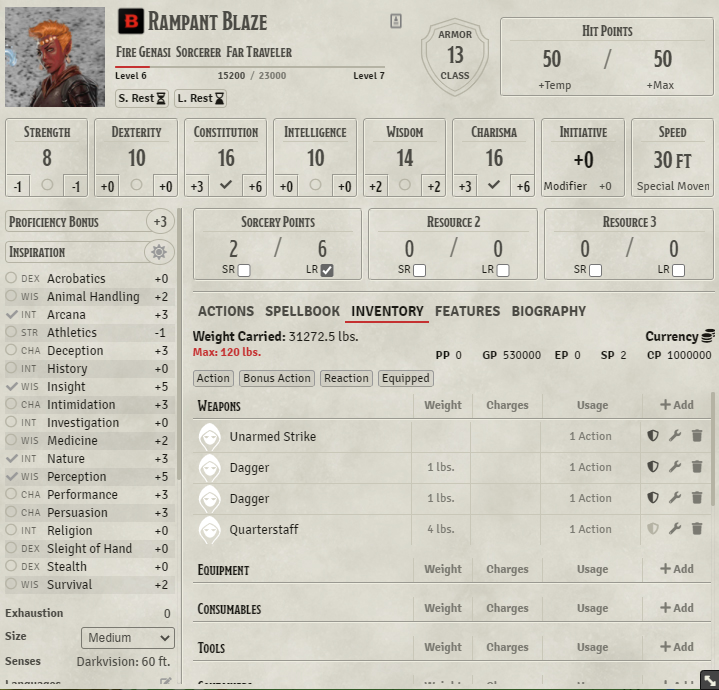 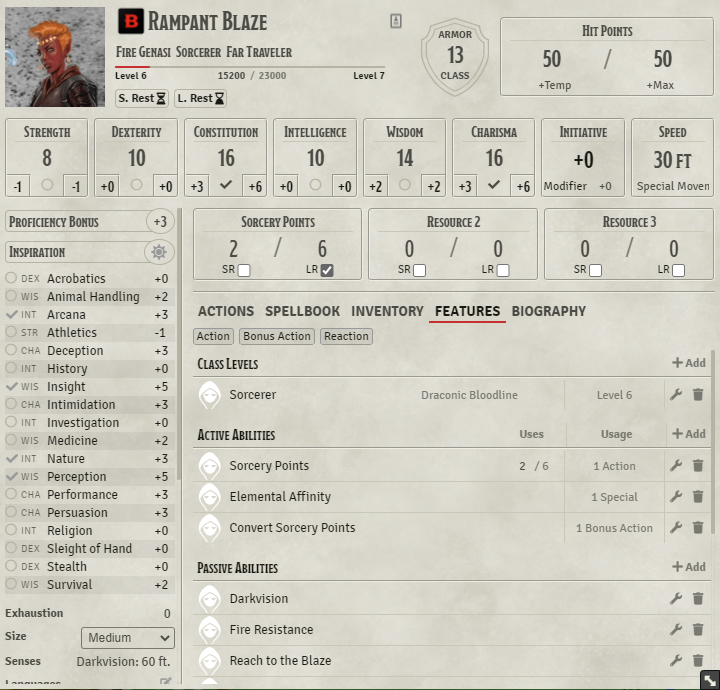 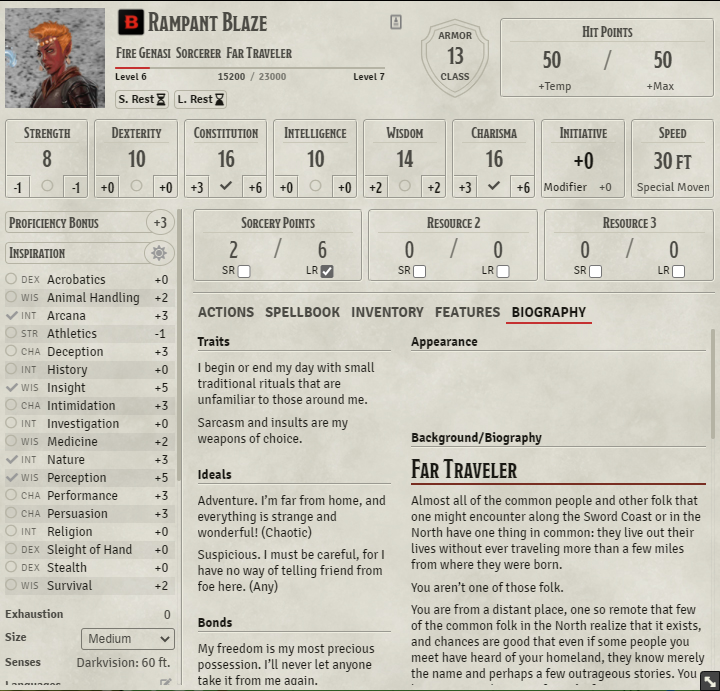 Chat Images: This is a really cool module. It allows you to drop images in chat, drag them in, paste in, load from URL, and even, that’s the real cool part, click on them to force show them to everyone full screen.

It happens to me a lot that I just want to share a snippet of something to my players and this allows me to bypass difficult uploading or going to another program to send it. It’s all quick and easy.

Combat Numbers: This is just a cute little thing that shows computer-game-like damage/healing numbers on tokens when you change their HP.

Combat Utility Belt: Explaining everything that CUB does will take an article of itself. I mostly use it to reroll initiative every round, for enhanced conditions, and for tracking concentration.

Conditional Visibility: Adds variable sight options for tokens (Such as Blindsight and Tremorsense) and it also adds specialty conditions you can attach to tokens to represent their visibility, up to a point that you can change a token to stealth, it’ll roll the check, and will then compare to other tokens’ passive score and only show it to them if they should see the hidden token.

Crash’s Automatic Blind Rolls: This module allows you to set which skill or ability rolls will automatically roll blind. Want to allow your players to roll their own Insight and Deception but not see the result beyond what you tell them, this is what you need.

D&D Beyond Importer: This is what, for me, is the lynchpin of moving from Roll20 to Foundry. I have all my content on D&D Beyond and getting it on Roll20 is a chore. But with this, a few clicks, and a few minutes, and all my DDB character and monster content is in Foundry.

DF Curvy Walls: Drawing walls in Foundry is about as much of a hassle as anywhere else. It takes work. Curvy Walls makes all that easier. First of all, it allows you to draw curves with ease.

And it even makes drawing simple rectangles quick and easy.

DF Settings Clarity: Basic Foundry QoL mod. Mostly because it allows you to search the module settings which is, when you get to as many as mine, quite useful.

Drag Ruler: Changes the regular movement method into just dragging and dropping and also adds a colored measurement, based on the character’s speed, that tells you how far you can go.

Terrain Layer & Terrain Ruler: Terrain Layer allows you to mark certain areas on the map to be difficult terrain and Terrain Ruler interfaces that and Drag Ruler to take that into account when you measure your movement.

Dynamic Active Effects: This is another one of the big modules that make moving to Foundry worth while and as such, it is a bit complicated. What it does is add another parallel system of effects on items and characters. And you can create effects to modify AC, damage, movement, and pretty much any detail in the game. You want Mage Armor? Add an effect that overrides AC to be 13 + Dex. Want Rage? Add an effect that adds damage to all melee damage and adds advantage to all strength check. Then you can turn those on and off however you want.

And then, you add…

Active Auras: that allows you to have actual dynamic auras that transfer bonuses to other characters. For example, you can set up your Paladin with an aura that will dynamically give a bonus to saves to any token close enough.

Forien’s Quest Log: This is a cool little addition that adds a quest log to Foundry. You can manage which quests the party is following, who’s it for, who gave it to them, what are the objectives and what are the rewards. Also, you can keep GM notes. 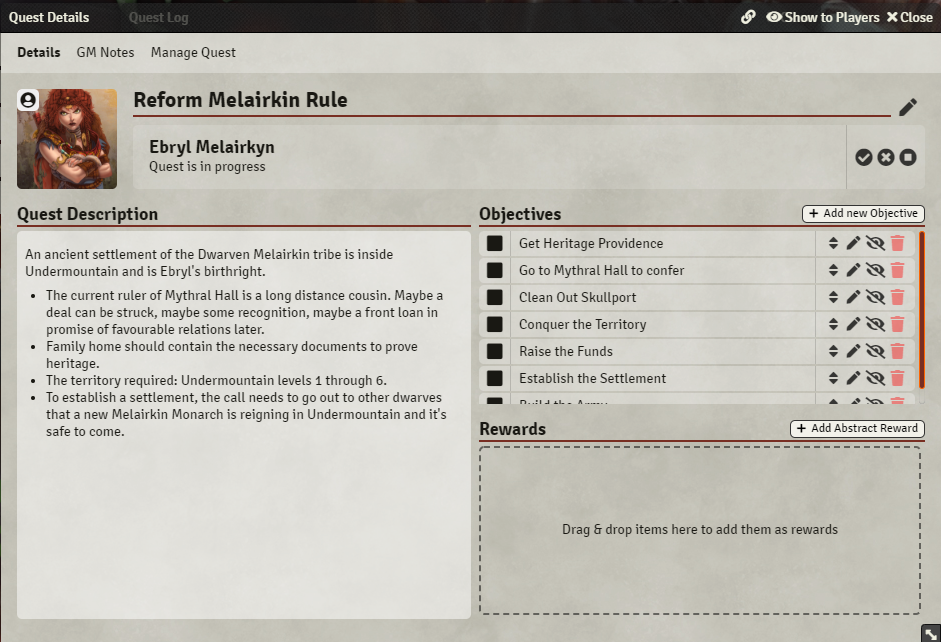 Foundry Community Tables: This is just a compendium chuck-full of all kinds of random tables. If you can think of a random table, it’s probably in there. Check here before you roll your own.

FX Master: Adds various world special effects so that you can have rain and fog or scanlines.

Give Item to Another Player: Adds another button next to each item in the inventory, allowing players to give items to other players without the hassle.

GM Screen: Allows you to set up a pull up a screen of quick reference data, basically, a grid of journal entries you can see with a click

Hide GM Rolls: Just hides the underlying formula for GM rolls from players, when you want to roll in the open but not tell your players the NPC’s exact bonuses.

Layer Hotkeys: Allows you to switch between different layer with set hotkeys. It should allow you to also change the sub-tools under the layers but it’s not working for me.

Magic Items: Specific for D&D, this adds the Magic Item tab to each item, allowing you to attach spells and feats to item. 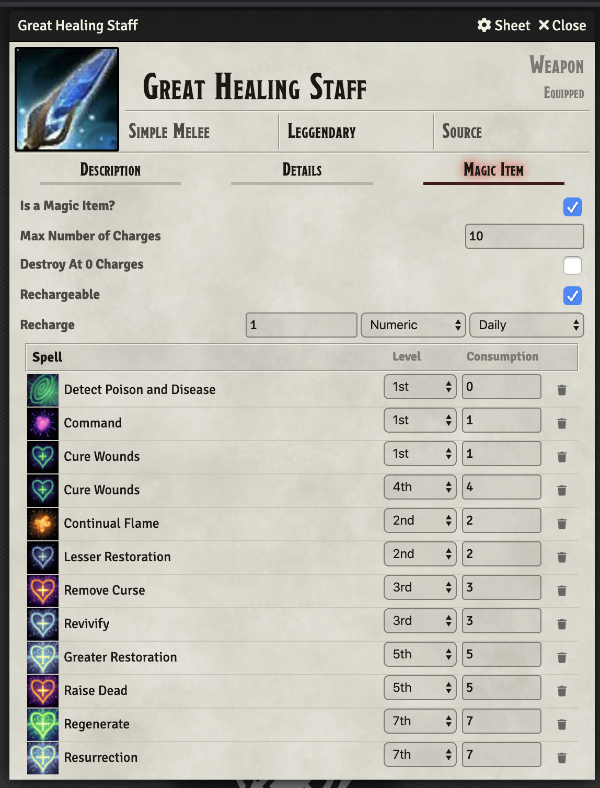 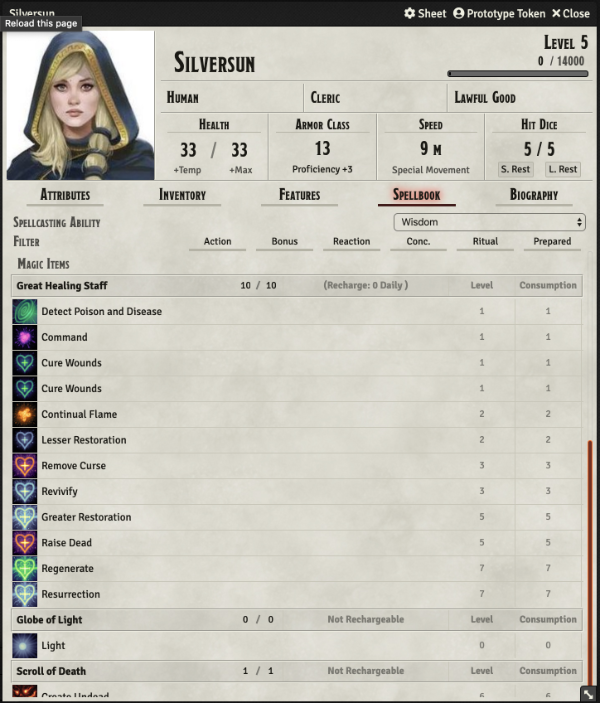 Midi-QoL: A lot of quality of life improvements that mostly make rolling for various things faster and easier.

Minimap: Gives guides and players another tool that shows a miniature version of the total map that you’re on. Very useful for players to plan. 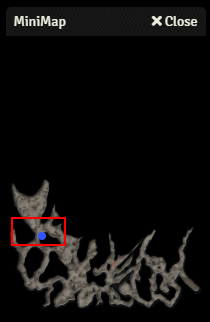 Narrator Tools: Gives a couple of narrative tools to give your game some more feel. Marked differently in chat and on the screen itself, the text stands out. And you can even quick narrate from Journal Entries. 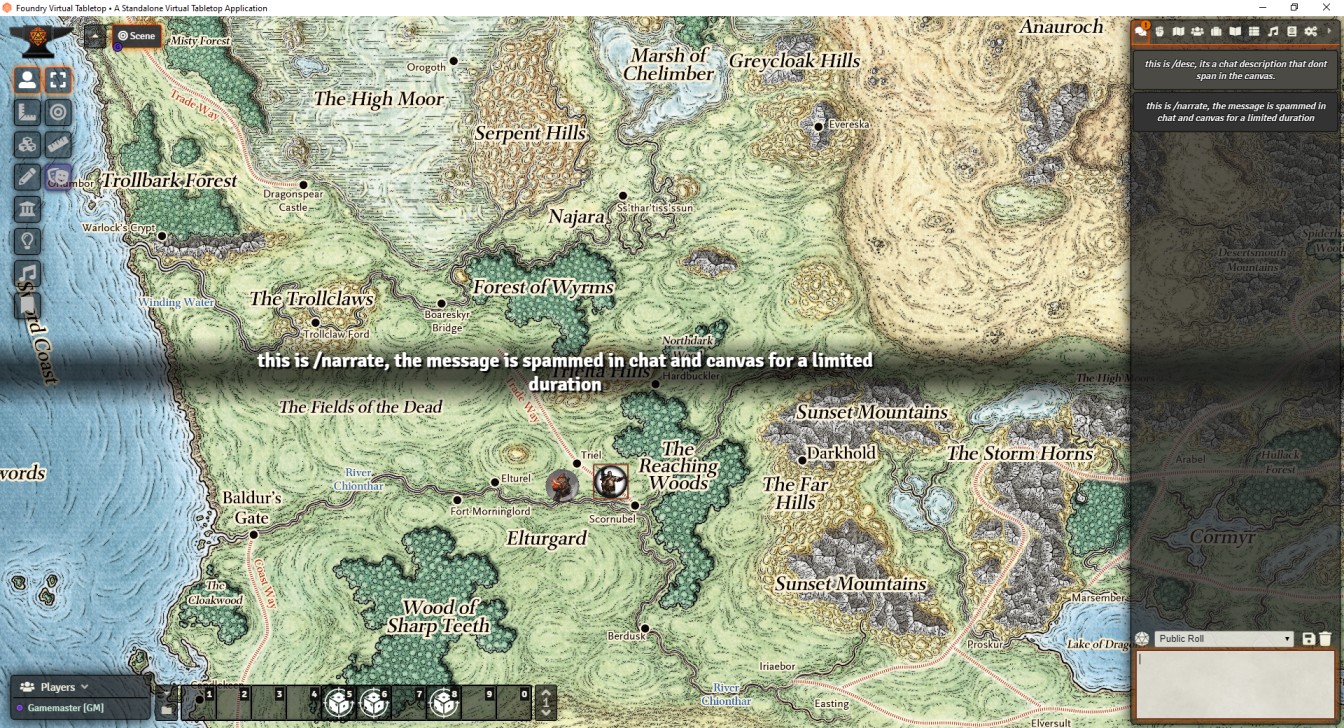 Parallaxia: Allows you to draw tiles that move.

Pointer and Pings: Gives you a simple but cool pinging tool.

Polyglot: Adds the ability to enter chat messages with different languages so only those who know them can read. Mostly useful for text games or books and scrolls that players find. Gets somewhat uncomfortable as a substitute for speech.

Quick Combat: Gives a few improvements to starting and stopping a combat encounter. It automatically starts a playlist and returns to the previous one, it can autoroll everyone or just NPCs, etc…

Quick Insert: Allows you to quick search and insert any entity to anywhere that accepts it. It is an absolute boon for game setup and character creation.

Quick Select Status: When you have a lot of possible conditions to set on actors (like I like it), you need this to make sense of everything. It makes the conditions list searchable so you spend less time looking for that specific condition by icon. 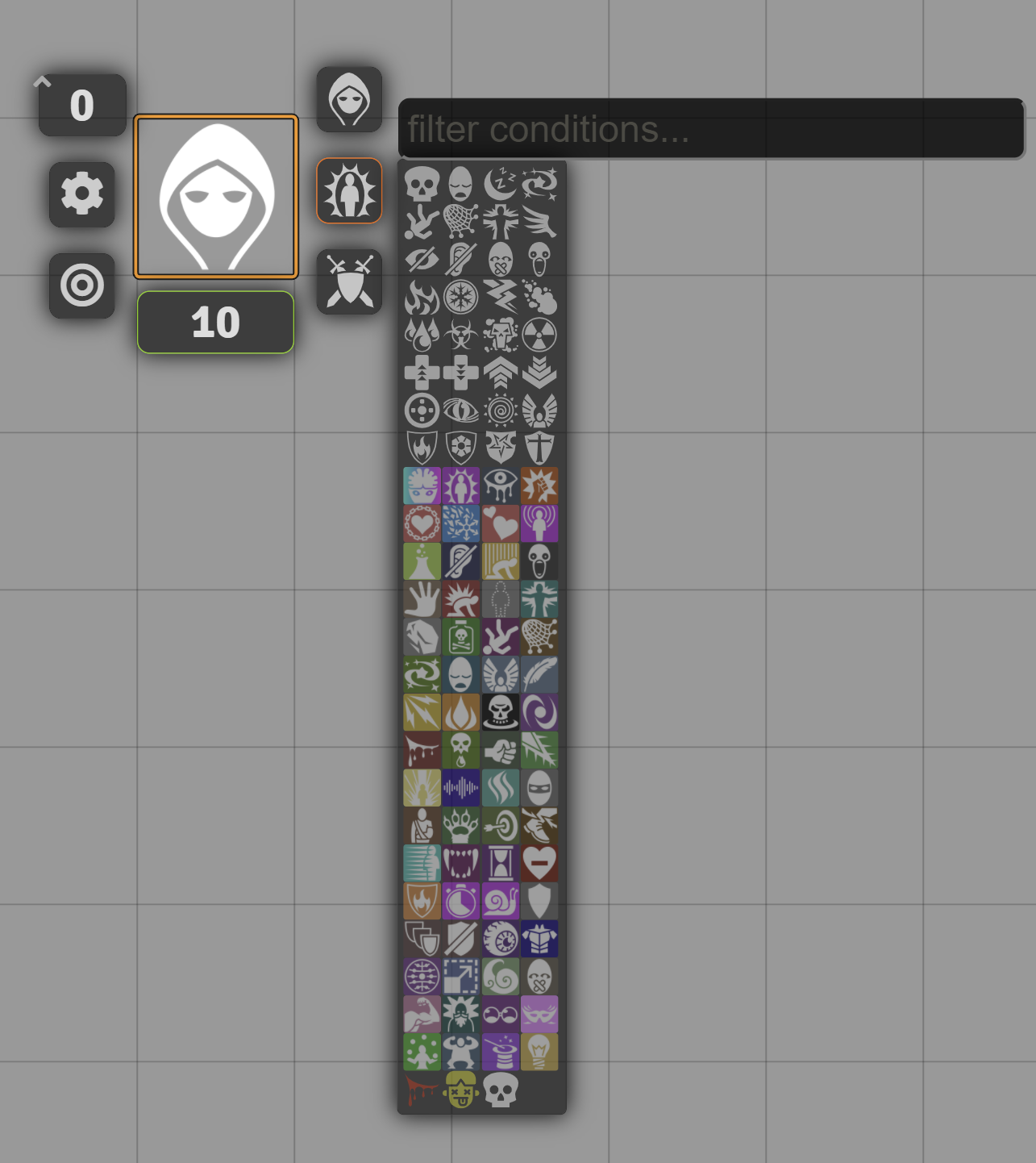 Shared Compendiums: Not really a module of itself but a set of instructions of how to create a module you can use to share compendiums between worlds. Very useful if you’re running multiple games and don’t want to create something more than once.

Simple Calendar: Adds a calendar to your game where you can write notes and track the game days. And it’s also configurable to several known fantasy calendars. 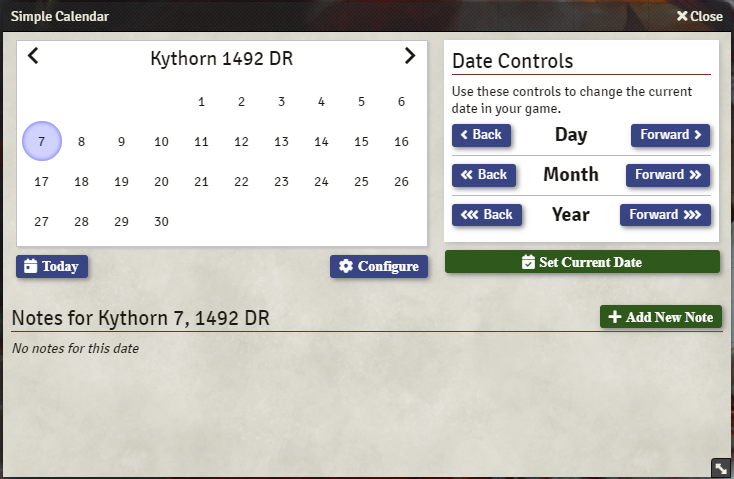 Simple Dice Roller: In case you just want to roll some dice, this adds another tool that opens a quick rolling window. 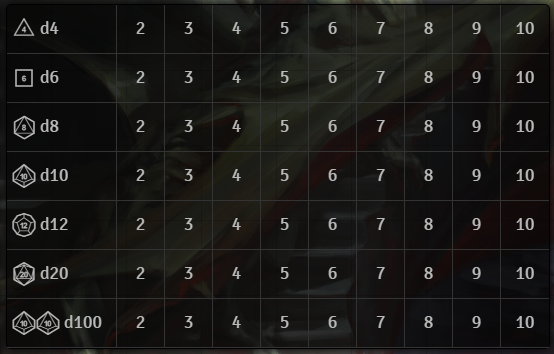 Skill Customisation: Modifies the regular skills list in D&D 5E to allow you to change the ability, and add flat or formula bonuses.

Smart Doors: Makes doors much more manageable by making them more visible, toggling between states, getting alerts and even synchronising door states.

Thandul’s Togglable Effects: Just a list of quick shortcuts for effects common in D&D. Just open the menu and select the effects. No need to enter formulas manually. 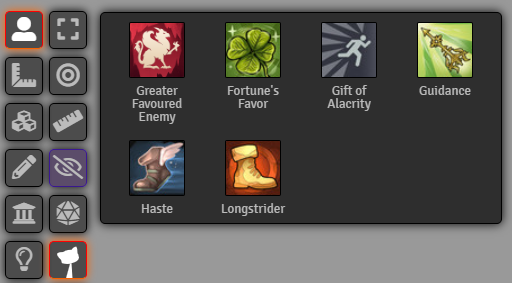 Token Action HUD: Basically makes having an open character sheet obsolete. Almost everything you need to use on a constant basis is now in a quick action menu that’s only there when you need it.

Token Attacher: Allows you to attach anything to any token, perfect for attaching that concentration spell’s template to the character that maintains it.

Token Auras: Moved from Roll20 to Foundry? Upset you don’t have the ability to just set colorful auras around your character? Well, now you can. This does nothing mechanically but if you want to always see the earth elemental’s tremorsense, this is great. No toggle for owner/everyone view, though. 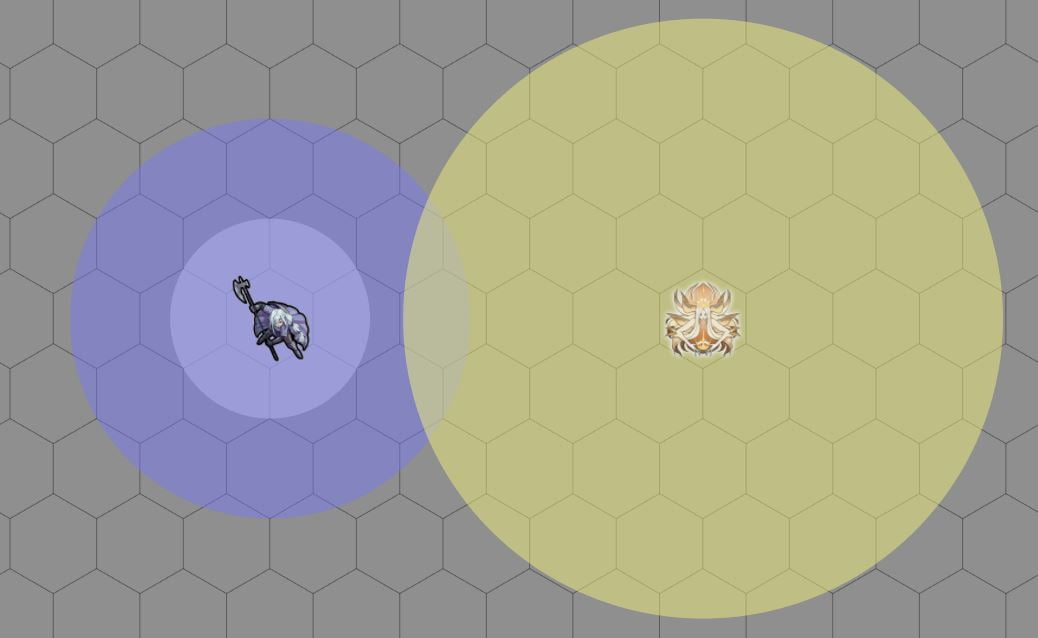 Token HUD Wildcard: A small addition but worth it if you have a lot of token images and like to use Wildcards. Also, it’s the best way I know to represent shapeshifters in the game. This adds a little button to the token HUD that allows you to choose a different image for it. 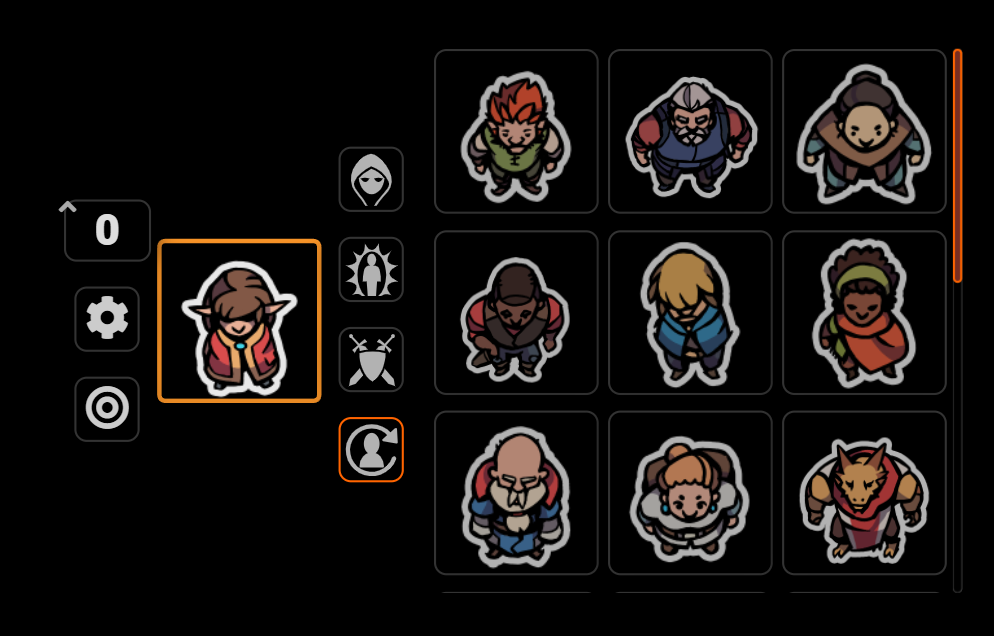 Token Info Icons: Adds info icons to the Token HUD so you can quickly check things like a character’s Armor Class or Passive Perception. These are very customisable.

Token Magic FX: Adds a bunch of cool effects you can apply to templates to make them look better. Also, a few other modules rely on this. Token Mold: Allows setting of global overrides for token fields. I mostly use it to randomise the names of NPCs so the players can decide targets specifically while also not have too much information when they see Minotaur 8.

Turn Marker: This just adds a colorful animated marker underneath the token whos turn this is. It’s not entirely necessary but I think it makes it easier to follow combat. 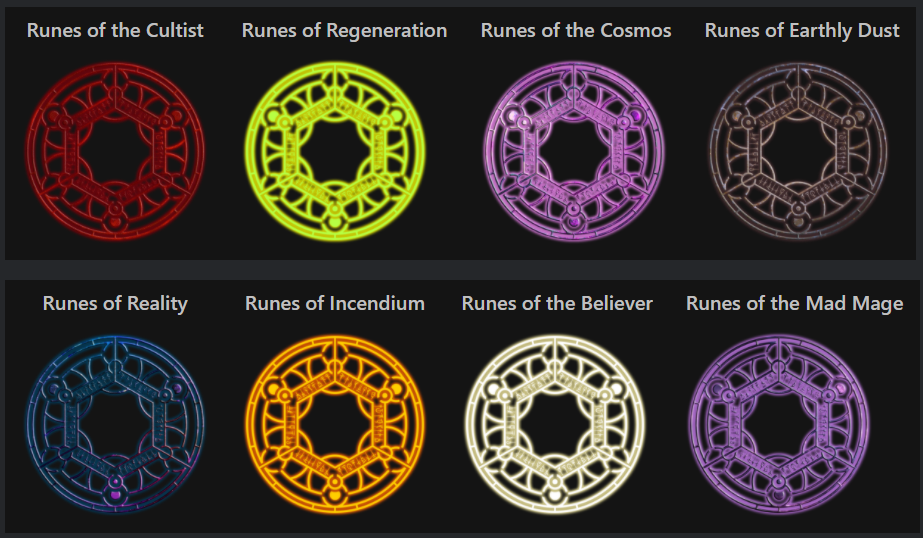 Wall Height: Adds the ability to set starting and ending height for walls so that flying or climbing PCs can look above them while not showing what’s behind them for characters on the ground.

These are just sources for high quality maps you can get through the Foundry Modules system.
Baileywiki Maps Pack
Dragonfire Maps
Caeora Pack
Moonlight Maps


Posted in Gaming, Role-Playing, Thinking Out Loud by Eran with no comments yet.

An unjust punishment is never forgotten.

What People Are Saying